Last Saturday, that is 16th July, I attendeda a meeting regarding the upcoming Kerala State IT Policy. It was a stakeholder consultation organized by DAKF, Software Freedom Law Centre and Ernakulam Public Library Infopark branch. The program was presided by Prasanth Sugathan of SFLC (I had met him during Swatanthra, when I helped Praveen in the Privacy track) and was inaugurated by M. P Sukumaran Nair, advisor to the Minister of Industries. The agenda of the meeting was to discuss about the suggestions that needs to be submitted to the Government before they draft the official IT policy, that will be in effect for the next few years. I attended the meeting representing Swathanthra Malayalam Computing. Even though the meeting had a small audience, some of the key topics were brought into the mix.

Professor Jyothi John, retired principal of Model Engg. College, discussed about MOOCs to improve the education standard of the State. He also talked about improving the industry-academia-research relationship that is in a pathetic state as of now. I was asked to talk a few words. But, since SMC hadn’t taken any official stand or points for the meeting, I actually talked about my views about the issue. Obviously, my topics were more focused on Language Computing, Digital empowerment of the language and as well as how FOSS should be the key stone of the IT policy. I also mentioned about the E-Waste problem that Anivar had discussed the other day on the Whatsapp group. 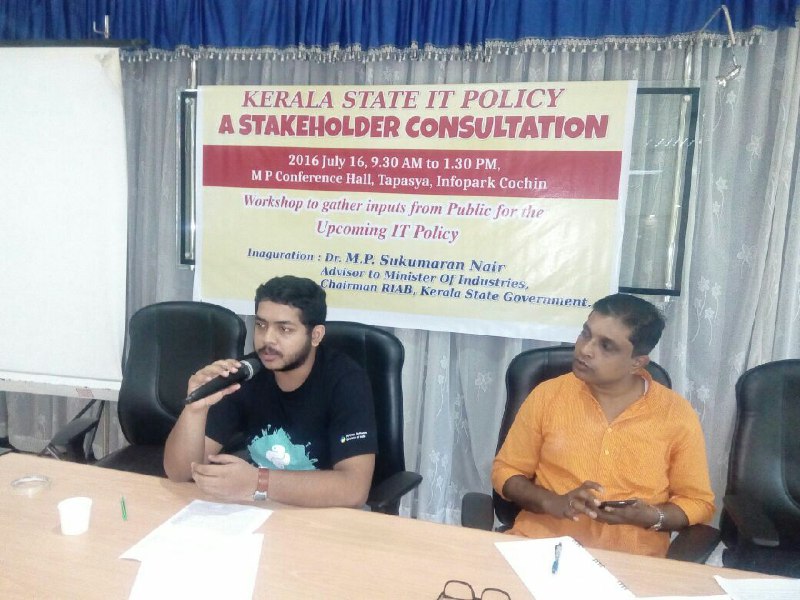 Mr. Joseph Thomas, the president of FSMI also talked on the importance of FOSS in IT policy (Kiran Thomas had some pretty strong disagreements with it. :D ). Following that, Babu Dominic from BSNL talked about their success stories with FOSS and how the project was scraped by government. There were some brilliant insights from Satheesh, who is a Social Entrepreneur now and once ran an IT-based company.

Following that, the meeting took the form of a round table discussion where interesting points regarding E-Waste and the money-saving nature of FOSS (Microsoft has been targetting Institutions for pirated copies, not home users) were raised by Mr. Bijumon, Asst Professor of Model Engg College. Mr. Jayasreekumar, who is a journalist talked about the important issue of the downtrodden people, or the people in the lower socio-economic belt were not part of the discussion and the image of digital divide that carves. We have to seriously increase diversity of participants in these meetings, as a large part of the population has no representation in them. Such meetings will be only fruitful, if the sidelined communities who also should benefit from this policy are brought together to participate in them.

The general theme of the meeting was pointing towards how the IT policy should focus more on the internal market, and how it should be helpful in entrepreneurs in competing with foreign competitors, atleast in the domestic market.

More and more meetings of this nature are a must, if the state is to advance in the domain of IT.